The Sunshine Children's Center in Lakeview was the topic of discussion at the Lakeview Town Council meeting on Monday, Oct. 5, as both the Lake Health District and the County are interested in purchasing the property.

What is to be done with the former Sunshine Children’s Center in Lakeview was the topic of discussion for the Lakeview Town Council at its meeting on Monday, Oct. 5, as both the County and the Lake Health District are interested in purchasing the property.

The Sunshine Children’s Center used to be the location for the Head Start program in Lakeview until it moved to its new location in the area. Since then the building has remained vacant.

“Currently many of our business office staff work from home and this would be a great location,” said Tveit.

Tveit said that after the business office staff moves back to the Lake District Hospital at some point in the future, then the Health District would look at building a daycare center at that location, especially for those families that do not qualify for Head Start. Tveit noted that the lack of daycare options is hurting the growth of the community, and that it will be a much-needed option for young families moving to the area.

He stated that under its current condition it is not suitable for children, as it faces costly ADA compliance repairs. Town Attorney Jeff Hedlund said that when it was being used on a consistent basis the structure was grandfathered in for code upgrades, but now that it is no longer being used, whoever takes it over needs to bring it up to code.

One issue that was brought up by Mayor Ray Turner, is that the building is facing some major overhaul issues and needs to be brought up to current code, which might deter people from acquiring the property.

The County would house the Step-Up program, the alternative education program for Lake County School District #7 (LCSD#7). Currently the program is being operated on school grounds, and the administration of the school district wants to have it off campus.

Council members Niki Taylor and Darwin Johnson were both in favor of the building being reused, but both had questions on its future use and what could be done with the structure.

Taylor said she wished to see a full proposal from both the County and the Health District, but she also wanted to see if there were any other individuals or entities in the area that might wish to use the property. People, or entities, wanting to submit a proposal should contact the Town of Lakeview for more information.

Johnson wanted to get a market value on the property to know what the building is truly worth on the open market before selling it.

Paisley residents gathered at the Community Center on Thursday, Oct. 8 to hear a report on the Brownfields project. The Lake County Coalition Assessment Grant of $600,000 funded environmental testing on potentially contaminated properties that might be eligible for commercial, industrial or residential development.

At the old Paisley Fremont Mill site, owned by the Carlon family, samples were gathered and sent to a laboratory for testing. The lab report was sent to the Oregon Department of Environmental Quality (DEQ), with a recommendation for no further action on that property.

Keith Ziobron from Cardno Company explained the evaluation process, which also involves re-use planning for properties. After DEQ approval, the property could potentially be available for purchase by a developer. Some possible uses suggested at the meeting were an RV park to encourage tourism, a drive-in theater, single family housing or light industrial.

Paisley is a partner with South Central Oregon Economic Development District, Lake County and the town of Lakeview. The coalition is applying for another three-year grant which would provide $600,000 to identify, examine and clean up newly identified Brownfields sites. Members of the Paisley community offered suggestions of possible properties that could potentially be developed as a restaurant to replace the Homestead Café, which was destroyed by fire, or another motel to accommodate tourists, since Travel Southern Oregon has been promoting local trails for mountain biking and hiking.

Lakeview Town Engineer Darryl Anderson is ready to take the next steps in the north end water project, which is sending out consent letters of annexation and beginning to publish bid notices.

The $750,000 project would extend the Town of Lakeview’s water and sewer system from where it currently dead ends near the cemeteries to Industrial Way. It would connect several businesses and a couple of residential homes to the overall system. While Cornerstone Industrial agreed to connect to the new system, the new owners, Imerys, have not confirmed if they will connect. Under Lakeview ordinance those businesses connecting to the system would automatically be annexed into the Town of Lakeview, and the property taxes they would normally pay the Town would go to pay back the cost of installing the system.

Anderson told the Council that the final loan from Business Oregon would be $708,000 as the Town has received a $45,000 grant from the Infrastructure Finance Authority (IFA).

When asked by Council member Darwin Johnson how quickly construction work could begin, Anderson said that as soon as Business Oregon signs off on the contract, and the bidding process is complete. One of the main issues is starting work now, as the current interest rate is 2.14% spread across 25 years. That money is disappearing as budgets at the state level become tighter; with less money to go around for these type of projects it is important for the project to start sooner rather than later, Anderson told the Council.

Mayor Ray Turner said that this project is a win-win for the Town of Lakeview, as it will bring more industry into the Town, but it would also help to entice new industries looking to relocate.

Johnson said while he did not like the idea of having debt that would be repaid through property taxes for the next 25 years, the project is important for the health of the Town. He was happy to hear that the loan could be paid off quicker by making extra payments from the Town budget, which he said will help the community reap the benefits of the property tax dollars.

Once the contract with Business Oregon is signed, and the letters of annexation are signed by the people wanting to connect to the new system, then the project will go out to bid. 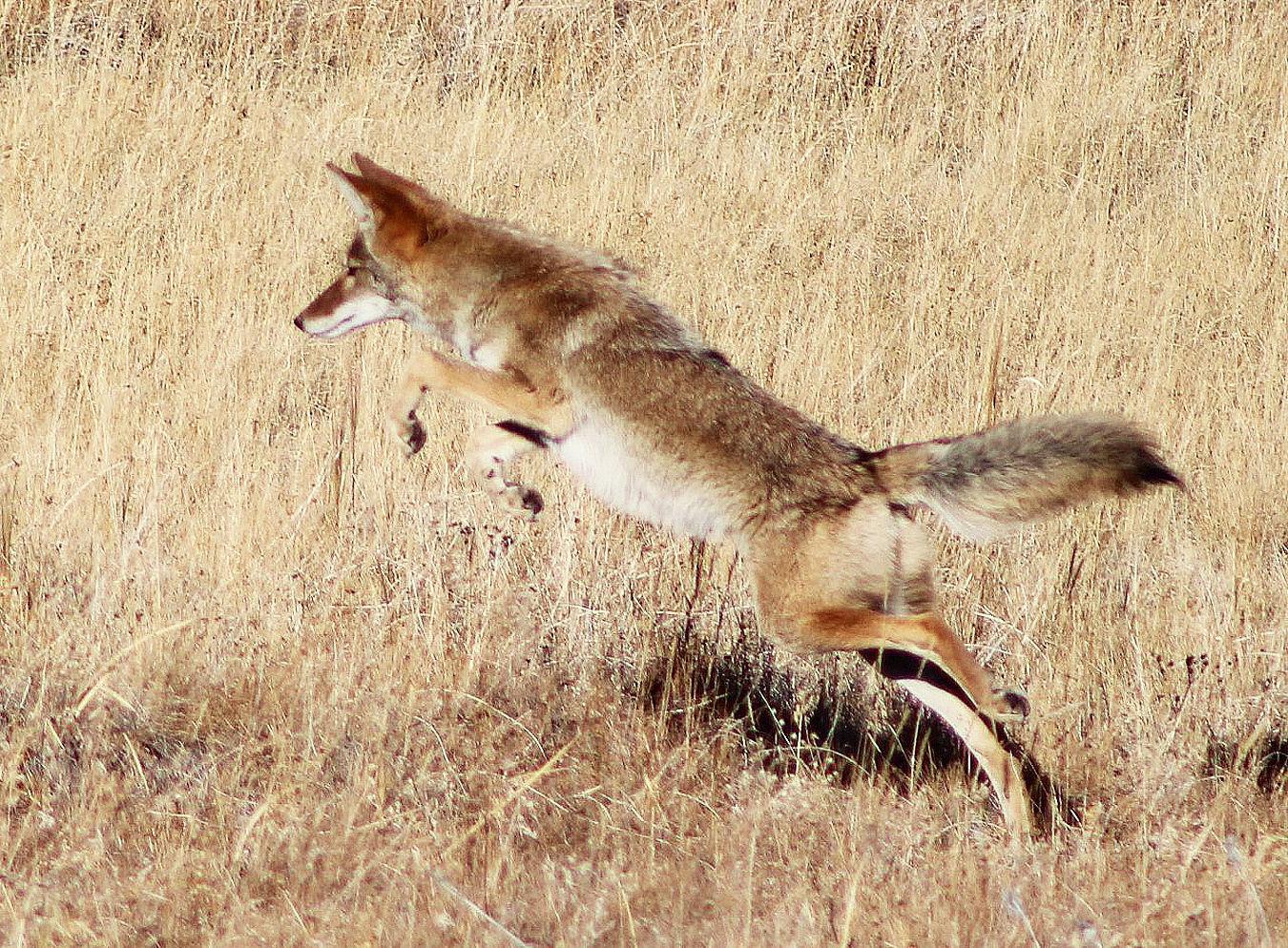 Thrill of the chase

This coyote was seen hunting on the Hart Mountain National Antelope Refuge, near the refuge headquarters. Kellie Carlsen captured this action shot. If you have a photo you would like to share with our readers, email tflynn@lakecountyexam.com.

Along with other Oregon counties, Lake County will be receiving rapid COVID-19 tests which will give results within 15 minutes, according to Lake County Public Health Director Judy Clarke. A date has not been set for when the tests will arrive locally.

The tests — called BionaxNOW rapid point-of-care antigen tests — are part of a group of 150 million that were purchased by the federal government from Abbott Labs. Fifty million of the tests are being sent to nursing homes and historically Black colleges and universities across the U.S.; the remaining 100 million tests will be sent in installments to individual states.

Oregon’s first 15,000 BinaxNOW tests were deployed to counties and long-term care facilities affected by recent wildfires, according to the Oregon Health Authority (OHA). In addition, OHA said it will prioritize testing for other communities hardest hit by COVID-19, including migrant and seasonal farmworkers. communities of color and tribal communities, and residents of congregate care settings.

According to the OHA, starting the week of Oct. 6 and continuing through the end of the year, Oregon will receive between 60,000 and 80,000 Abbott BinaxNOW tests per week. “This will nearly double Oregon’s testing capacity, which will help identify more people who have COVID-19,” the OHA stated. Clarke said the tests will come to Lake County in packets of 40.

The tests are 97.1% accurate in diagnosing positive cases, and 98.5% accurate for negative cases.

School-based health centers and health partners working with K-12 schools will also be prioritized in the distribution of the tests in order to support the testing of symptomatic students and staff, and help with contact tracing efforts.

Each test costs $5, but will be provided through Lake County Public Health free of charge. However, tests will not be administered to just anyone who wants one. Clarke explained that Public Health has been given recommendations on who should be given a test. They are to be used on outbreaks and work best on symptomatic people, she said.

Data have shown that it is fairly common for people who are positive for COVID-19 to be asymptomatic. “A recent summary of the latest data by the CDC shows that about two-thirds of the COVID-19 transmissions in the U.S. come from people not showing symptoms,” the University of California, Davis reports on its website.

OHA also announced that some of the tests will be held back as a strategic reserve to ensure a supply beyond December — when the current allocation is set to end — and to be used to contain major outbreaks in counties.