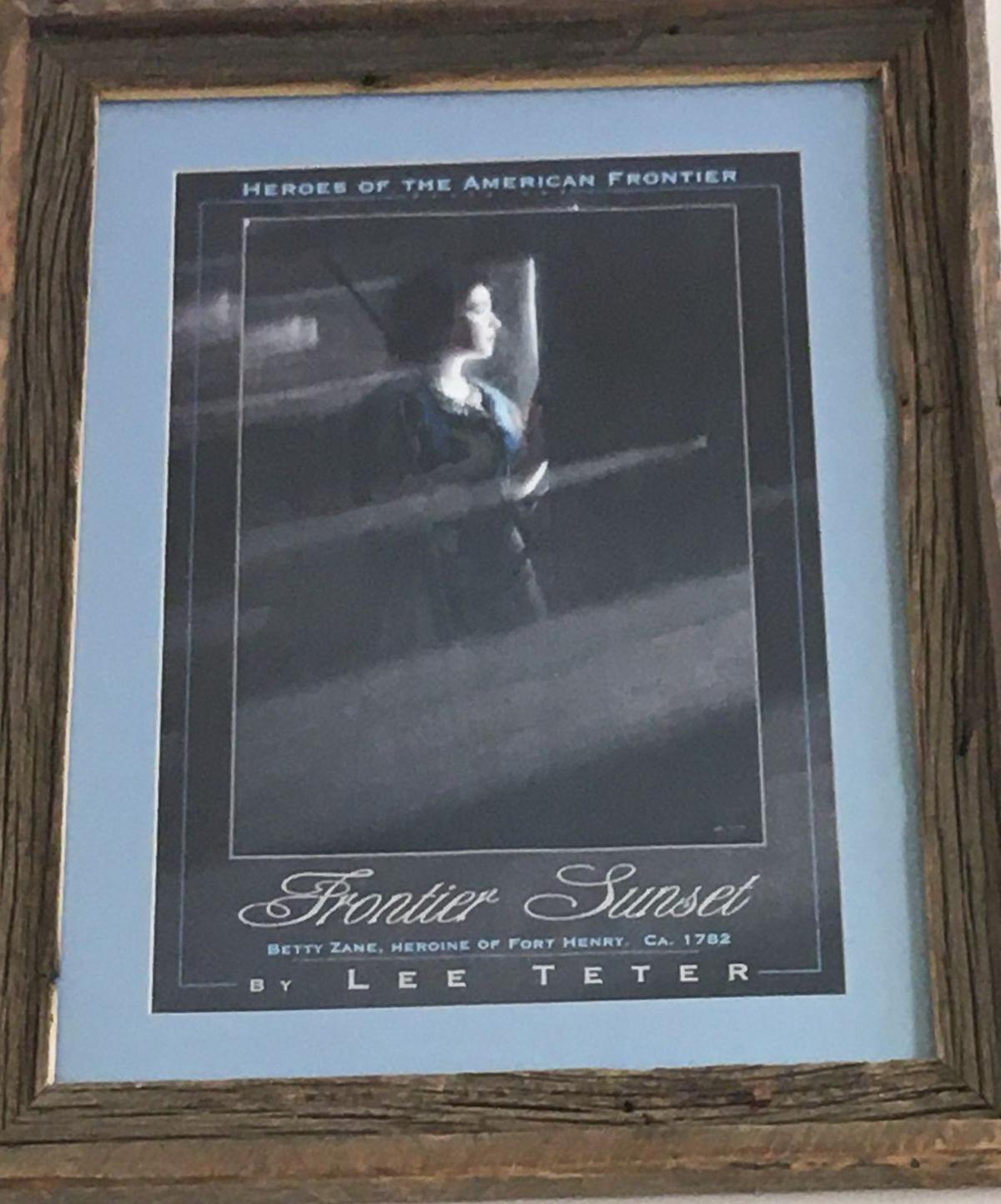 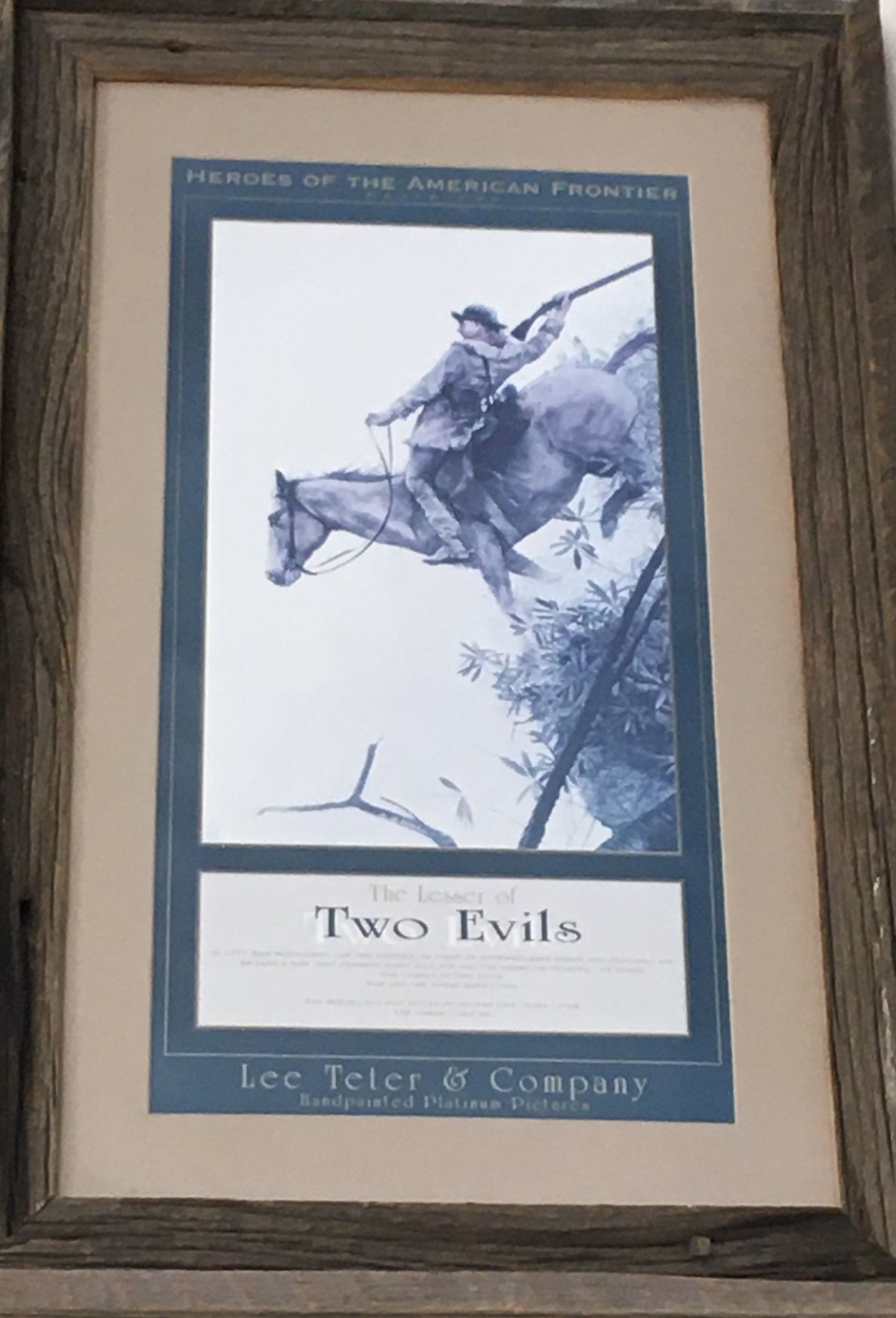 “Frontier Sunset” and “Two Evils” are now on display in the Lakeview Post Office lobby. These beautiful, hand-painted, platinum pictures of Betty Zane and Samuel McCulloch are from the Heroes of the American Frontier series by artist Lee Teter. They are on long-term loan from the Warner Mountain Gun Club. The history they depict is fascinating.

Lakeview resident Norm May gave his collection of artwork to the Warner Mountain Gun Club in 2016. For many years he had been gathering prints related to the shooting sports and American history. A number of prints were limited editions by renowned artist Randolph S. Wright. May’s original intention was to create an art gallery at the Club range in Bullard Canyon. A founding member of the Club, May donated so much time and money that the Club voted to name its Bullard Canyon facility the “Norm May Range.” May was a tireless and enthusiastic supporter of people who wanted to learn to shoot. Into his 90’s he was still dominating rifle competitions in California and Oregon. He read widely and was a great teller of historical tales.

To May’s delight, the Club displayed his prints under cover behind the shooting benches at the range. However, the Range, though private and with a locked gate, was not secure and four Wright prints were stolen early in 2017. The theft has not been solved yet. The Club removed the rest of the prints, offering some for auction at local National Rifle Association banquets since May, who died in late 2016, was a lifetime member of the NRA. Knowing that he hoped to share this historic art with the public, the Club looked for a secure display space. In May 2020, Janice Cooper, Lakeview postmaster, welcomed the art. She said, “They are beautiful, and the history they portray is so interesting.”

Both prints show pioneers who defended Fort Henry against British and Indian forces on the frontier during the Revolutionary War. Fort Henry was a colonial fort which stood about a quarter mile from the Ohio River. Re-named in honor of Patrick Henry by the Americans.

“Two Evils” is from the first battle, September 1777, when Samuel McCullough was surrounded by Indians and took a chance. “The Indians had not fired a shot, and he well knew what this portended, as they could easily have killed him had they chosen to do so. He appreciated the feeling of hatred felt towards him by the foe, and saw at a glance the intention to take him alive if possible, that his ashes might be offered up as a sacrifice to the manes of their friends slain by his hand. This was to die a thousand deaths, in preference to which he determined to run the risk of being dashed in pieces; and he struck his heels against the sides of his steed, who sprang forward toward the precipice. The encircling warriors had rapidly lessened the space between them and their intended victim, and, as they saw him so completely within their toils, raised a yell of triumph, little dreaming of the fearful energy which was to baffle their expectations. As they saw him push his horse in the direction of the precipice, which they had supposed an unsurmountable obstacle to his escape, they stood in wonder and amazement, scarcely believing that it could be his intention to attempt the awful leap, which was, to all appearances, certain death.” (from Pioneer Life in the West; comprising the adventures of Boone Kenton Brady Clarke....Philadelphia, The Keystone Publishing Co., 1890. p. 144-156. Ohio County Public Library, McColloch’s Leap)

McColloch later lost his left arm in a hunting accident and was killed in another Indian ambush in 1782. Today a granite monument on U.S. 40 marks the site of the heroic leap of Samuel McColloch. According to geni.com, “Major Samuel McCulloch: Born 1750, Burlington township, New Jersey. Died July 30, 1782 (age 32) in West Virginia. Killed, scalped, disemboweled and heart eaten by Indians.” He was brother to the husband of Elizabeth McCulloch Zane, Betty Zane’s aunt.

“Frontier Sunset” portrays Betty Zane, circa 1782. At the age of 13, or 16, or 23 -- there are some variants of her date of birth, a historical marker in Wheeling, W. Va., records that on Sept. 11, 1782, the Zane family was under siege in Fort Henry by Native American Allies of the British. During the siege, while Betty was loading a Kentucky rifle, her father was wounded and fell from the top of the fort right in front of her. The captain of the fort said, “We have lost two men, one Mr. Zane and another gentlemen, and we need black gunpowder.”

“The sixteen-year-old girl who performed that courageous feat was Elizabeth Zane and the fort saved by her daring was Fort Henry, located in what is now the downtown business district of Wheeling. The adjacent cabin from which she obtained the gunpowder was that of her brother, who, in an effort to provide a cross-fire for the fort, was occupying his own cabin/blockhouse during that siege. Zane’s brother, the thirty-four-year-old pioneer Colonel Ebenezer Zane, was the founder and defender of Wheeling. The attack was the third since 1777 and the second extensive siege of this fort.” (West Virginia History, Vol 55 (1996), pp 95-109).

May said that in his reading he learned that Betty was the fastest runner in the settlement. Britannica reports, “To objections that a man could run faster, she is supposed to have replied, “You have not one man to spare; a woman will not be missed in the defense of the fort,” and “’Tis better a maid than a man should die.” Wikipedia adds, “The defenders decided to dispatch one of its men to secure more ammunition from the Zane homestead. Betty Zane volunteered for the dangerous task. During her departing run, she was heckled by both native and British soldiers. Upon successfully reaching the Zane homestead, she gathered a table cloth and filled it with gunpowder. During her return, she was fired upon but was uninjured. It is believed that one bullet did, in fact, pierce her clothing. As a result of Zane’s heroism, Fort Henry remained in American control.”

“Some 250 Indians and 40 British Rangers watched in amazement as the gates of the fort they were besieging swung open, allowing a teenage girl to slip out. Still watching intently, they saw the girl run quickly across the open field and disappear into an adjacent cabin about sixty yards from the southeastern corner of the fort. Only a few minutes passed before they saw this same girl emerge from the cabin, but she now carried a large bundle wrapped in her apron. Suddenly realizing that this girl carried several pounds of gunpowder, the Indians opened fire on her during the dozen or so seconds that their target was in view. Fortunately for the lives of those settlers in that western Virginia fort, the girl sped up the slight incline to the fort with such fleetness of foot that she was able to reach her destination unharmed, carrying her precious cargo of powder. With that powder, the fort continued to hold off the attackers until the following morning, when, losing heart, the enemy raised the siege and departed.” (West Virginia History).

“According to her brother Ebenezer, Betty could skillfully paddle a canoe anywhere, run almost as fast as any Zane male, and she mastered the feminine arts of sewing, cooking, and weaving as well. Ebenezer knew beyond doubting that his sister Betty could do anything she put her mind to and do it well.

“Like many historical stories, through the generations the Zane story has evolved into a confusing mixture of fact and fiction and conflicting accounts and documentation. Betty Zane’s date of birth is an example. Some records say that she was born in 1765, while others, including her tombstone, state that her date of birth is 1759. North America, Family Histories, 1500-2000 lists her birthday as 1766.

“The only daughter of William and Nancy Nolan Zane, Elizabeth Zane, better known as Betty or Betsy, was born on July 19, 1759, in Moorefield, Va. Her mother Nancy died in 1764, when Betty was just five years old. Joining her five brothers, Ebenezer, Isaac, Silas, Jonathan, and Andrew, she quickly learned the skills of frontier living from them and her father William.” (Pluckily).

One of Betty’s brothers, Isaac Zane, lived with Wyandot Indians for 17 years, marrying into the tribe. Another brother, Jonathan, captured at the same time, was ransomed after 2 years. Check out “Onward Ohio History: The Waters of the Walk-in-the-Water.” The most famous Zane nowadays is probably Zane Gray, who wrote the book Betty Zane about his ancestress.

If anyone has information about the stolen Randolph S. Wright prints, contact the Lake County Sherriff’s Office at 541-947-6027.

For information about the Warner Mountain Gun Club go the club Facebook page or the website https://warnermountaingunclub.org.