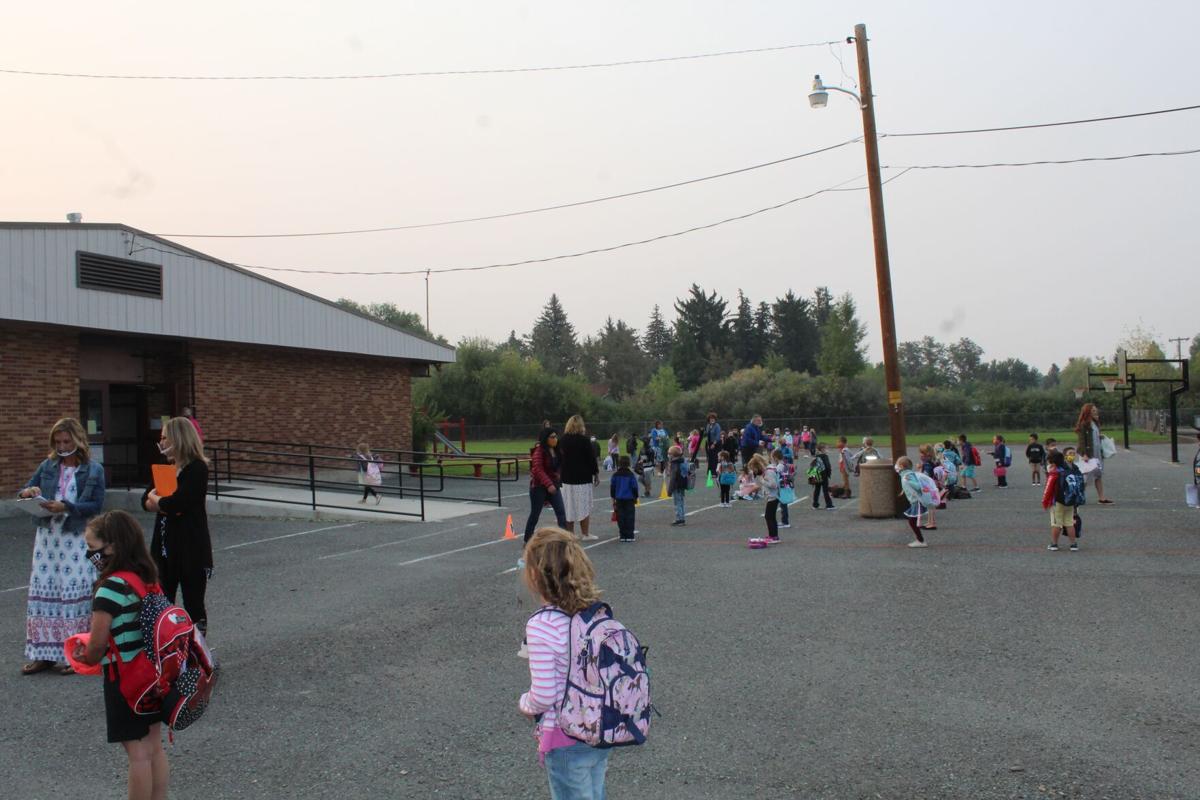 Students at Fremont/A.D. Hay lined up outside on the first day of school, Wednesday, Sept. 16, students wore face coverings and were physically distant from each other. 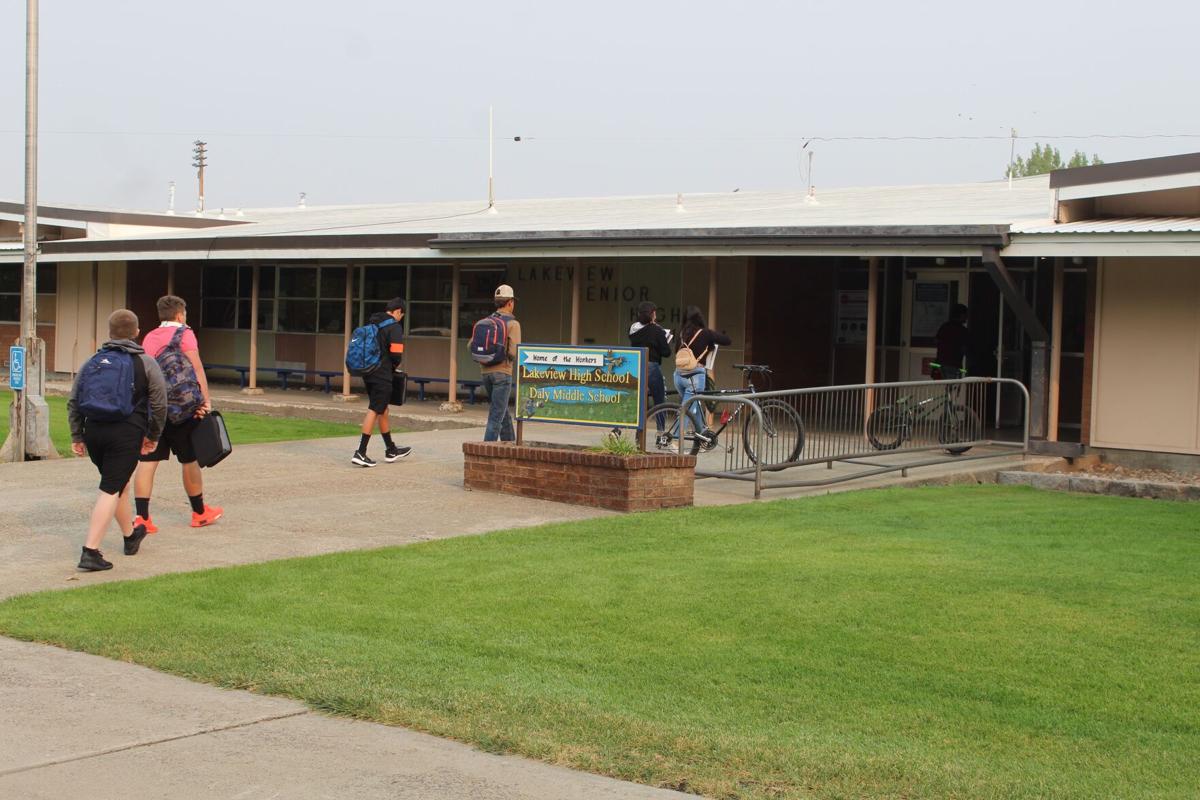 Daly Middle School and Lakeview High School students walk into the front doors of the school on Wednesday, Sept. 16. Students were required to wear face coverings, and the school now only has one entrance open to help facilitate

Students at Fremont/A.D. Hay lined up outside on the first day of school, Wednesday, Sept. 16, students wore face coverings and were physically distant from each other.

Daly Middle School and Lakeview High School students walk into the front doors of the school on Wednesday, Sept. 16. Students were required to wear face coverings, and the school now only has one entrance open to help facilitate

There was uncertainty surrounding the start of the school year, including pushing it back a week later than normal; teachers, staff, and administrators were thrilled to welcome students back to the classroom in Lake County School District #7 (LCSD#7) on Wednesday, Sept. 16.

The last time teachers saw their students was in early March. At that point Gov. Kate Brown ordered all schools closed and the remainder of the school year was to be done through distance learning. As students and schools struggled to instantly make the change, the Oregon Department of Education (ODE) and other school districts across the state worked on how schools would look for the fall.

ODE promised guidance throughout the summer, including letting local school districts decide on one of three models they wished to pursue , in-person, a hybrid model or distance learning only. Many school districts opted for a version of the hybrid model, where students are in the classroom for two days and then distance learning for two days. LCSD#7 Supt. Michael Carter made it his goal to get students back into the classroom as much as possible for the new school year.

That looked in doubt when Brown released new metrics for school reopening that seriously disadvantaged districts in smaller counties such as Lake County. With push back from state legislators and school district administrators in the rural counties, Brown changed the guidelines for schools reopening in smaller counties. That allowed many district to reopen with students in the classroom.

LCSD#7 is the largest district in the state with students in the classroom every day of the week, though changes had to be made. First the start times for the elementary and middle/high school had to be changed, with the latter starting later in the morning to allow time for the school buses to be cleaned. During the summer Carter said that one of the main obstacles standing in the way of reopening was transportation and the rules surrounding transportation, such as physical space.

The first day for Fremont/A.D. Hay was one of both normalcy and the new normal. As it was starting, early breakfast was offered to those students who wished to partake in the cafeteria. Plastic screens have been placed in the middle of the room, and each seating area is split by grade level. This will be offered every morning.

Instead of going to class right away students then had to line up by grade level and teacher; spots were painted where each student had to stand while wearing a face covering.

Parents watched from the sidewalks as their children were lining up for school. Many of them were taking videos or pictures of the first day.

At LCSD#7’s board meeting on Wednesday, Sept. 16, Susan Warner, principal of the elementary schools, and Lane Stratton, principal of Daly Middle School and Lakeview High School, updated the Board on how the first day went.

Warner said that the first day, and the rest of the week, had gone really well. She reported that everyone is following the face covering rule with no major issues. One area she was concerned about was the kindergarten students starting school for the first time. But she credited the kindergarten teachers meeting one-on-one with their students and parents to go over what school will be like.

Stratton said that other than only the one entrance to the building on south Third street, and the requirements to wear face coverings, it was like any other first day of school. The Seventh graders struggled to find their classrooms and seniors were grumpy. Ninth graders were happy because they can now leave the campus to get lunch. He did say only one student forgot his mask, and one went the wrong way in the hallway, as all hallways are one way around the school.

“Everyone was really excited to be back in the classroom,” said Stratton.

Both Stratton and Warner credited the additional in-service days for teachers before the start of the school year as the main reason things have gone so smoothly.

The district is still continuing trainings in Google classroom. Though Carter does not want to go to distance learning he would like all staff to remain refreshed on the distance learning aspect just in case it becomes a necessity. So far around 100 students have signed up for the Lakeview Academy which is the home schooling/distance learning option that parents had if they did not feel comfortable sending their children back to the classroom.

“I am so very pleased that we were able to bring students back with in person learning. Our staff worked many hours to prepare for this event and it has been a success. The hard work has paid off. Our students, our staff, and our entire community is so happy that our students are back in school. As the superintendent I’m so very pleased with the start of the school year and it went so smoothly. I look forward to a great school year where our kids can be successful and we work through this unique crisis,” said Carter.