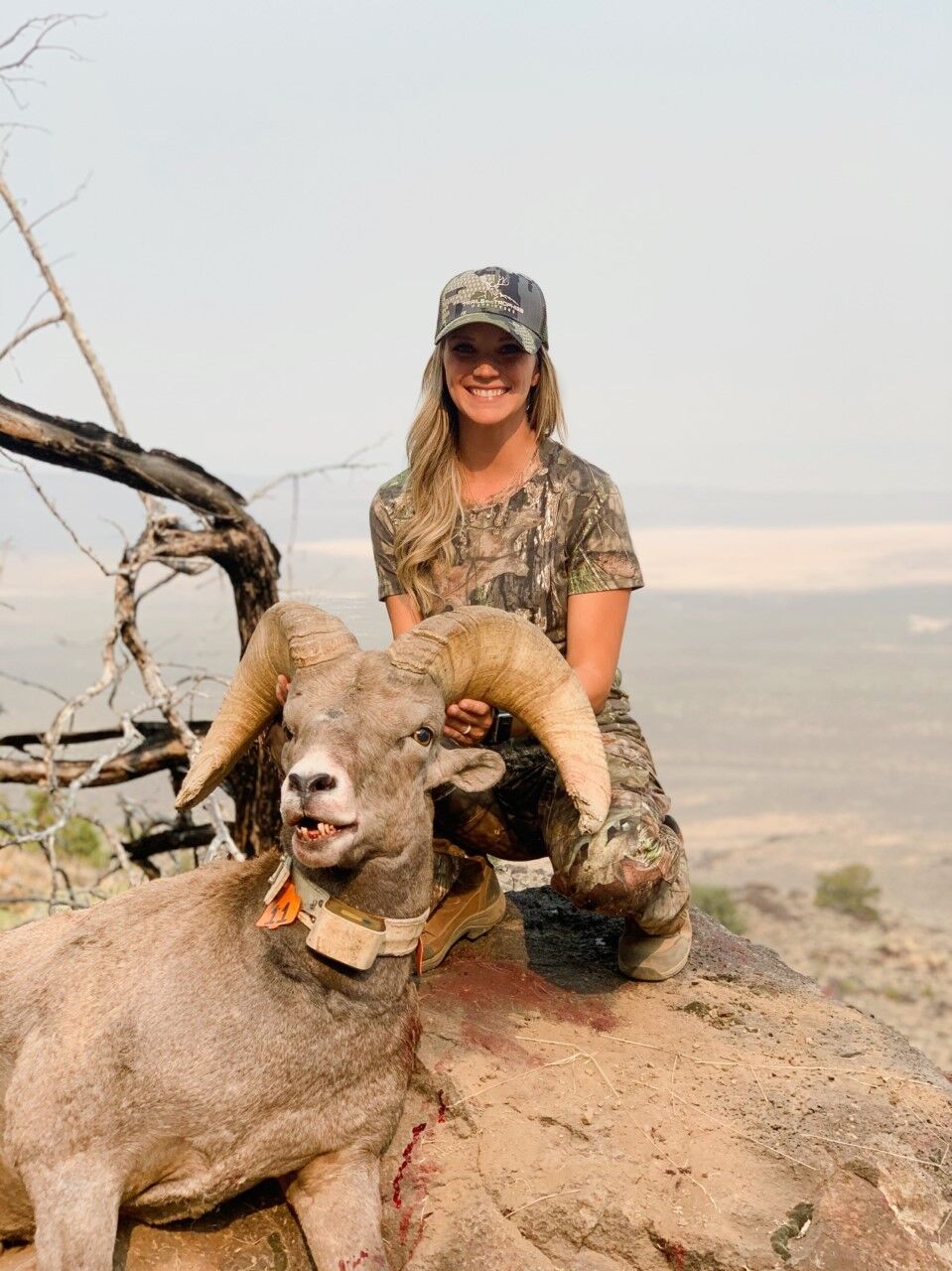 Jess Higgins, who grew up in Lakeview, poses with the Big Horn Sheep that she killed near the Coleman Rim. 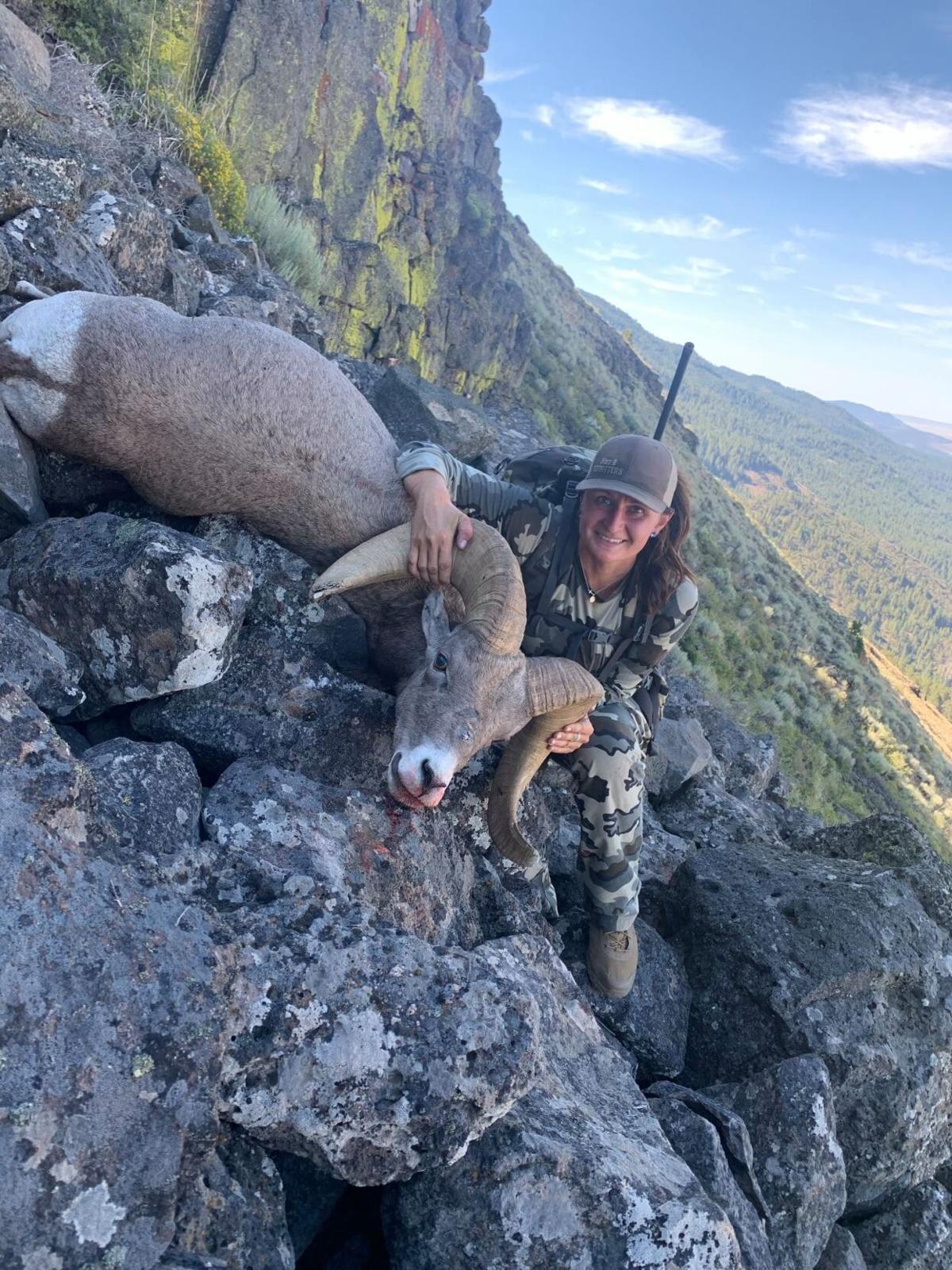 Jess Childress poses with the 10-year-old Big Horn sheep that she hunted on the Abert Rim; she was one of the two people with Lakeview ties to win a Big Horn Sheep tag.

Jess Higgins, who grew up in Lakeview, poses with the Big Horn Sheep that she killed near the Coleman Rim.

Jess Childress poses with the 10-year-old Big Horn sheep that she hunted on the Abert Rim; she was one of the two people with Lakeview ties to win a Big Horn Sheep tag.

Big Horn sheep tags are extremely rare. Generally only a couple are drawn each year, and many people who have been entering their names for decades have never gotten a tag. Thus, a Big Horn hunt is regarded as the experience of a lifetime. Two women with Lakeview ties were the winners of this year’s Big Horn sheep tags, Jess Childress and Jess Higgins.

Higgins, nee Fredericks, grew up in Lakeview, graduated from Lakeview High School in 2005 and has lived in Klamath Falls since. She first started hunting when she was 15 years old, when her dad took her and her siblings on his hunts. She normally deer hunts, but decided on the advice of a coworker to put her name in for Big Horn sheep this year, her first time entering the drawing, and won.

“I didn’t know it was a big deal until my name was drawn,” said Higgins.

Her unit was the Guano/East Coleman unit, just south and east of Adel. She began scouting the area with family members, looking for the perfect ram. While the season does not open until the beginning of August, Higgins and her friends and family spent weekends scouting all through July. They found several potential targets. Higgins said she never worked so hard for a hunt as the Big Horn sheep were on the side of mountains and ridges, making them often times difficult to track and follow.

But after several weeks of watching them she picked the one she wanted to bag - an eight-year-old ram.

During opening weekend in August she and her friends and family went together to find that ram. On a dirt road in Coleman Valley they were watching the Coleman Rim, and finally located him. Then the hunt began. It took Higgins around 45 minutes of tracking and following him on the mountain. She was worried for a moment that they would escape through a spring, but the ram jumped onto a rock and looked toward her as if in challenge. Higgins felt that she was too far away, at around 300 yards, and moved slightly closer to 288 yards, though she would have moved closer for a better shot, she knew that she might not have another chance, so she took the shot.

Afterward, the people with her helped get the ram down to the vehicle. After reporting her successful kill to the Oregon Department of Fish and Wildlife, she kept the hide, horns and head that is currently at a taxidermist, which she said takes about a year. She also kept the meat. She described the taste as similar to venison.

“It was crazy, I had no idea it would be such a big deal. It was physically and mentally exhausting, but it was a fun and exciting hunt,” said Higgins.

Childress, a Lakeview native and 2003 LHS graduate, also drew a Big Horn sheep tag this year, though her hunt took place on the Warner Unit, Childress described the area as somewhat frightening as she was at the top of the scariest portion of the Abert Rim looking down into the Valley Falls area.

Childress was raised in a hunting family, though she really did not begin to hunt full time until after college, as the sport she played, volleyball, coincided with the hunting season. Over the past several years, Childress has been bow hunting deer and elk. Like Higgins, she never expected to win a Big Horn sheep tag, but has been putting her name into the drawing for the past couple of years.

After learning that she won, Childress started scouting with her friend Logan Sheridan.

“Me and my friend Sheridan basically lived in the mountains for two and half months. We picked out four rams,” said Childress.

On her opening morning she and her crew of close friends and family set off for the face of Abert Rim, and found the ten-year-old she and Sheridan had chosen. She bagged him early in the morning, but due to the steepness of the terrain she and her crew were not able to get him out until mid-afternoon. She had to climb down to him, and that was often steep, on the Abert Rim face.

Like Higgins she is getting her ram shoulder mounted, she kept the meat and gave packages of meat to those that helped her on the day of the hunt. She was worried the ram’s meat would not taste that good as he was older, and according to Childress, stank when they approached him. In the end though Childress said that the meat tastes fantastic.

“It was the best day in my life. I was with my best friend and my dad on the hunt and that was the best thing ever in the world,” said Childress.